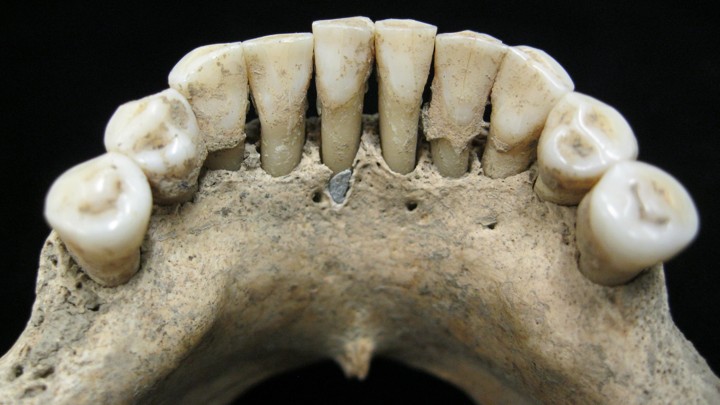 This article was originally published in November 2019 on the Retrospect Journal website and can be read here.

A 2014 analysis of the remains of a woman, exhumed from the burial site adjacent to a former medieval monastery in Dalheim, Germany, found brilliant blue particles embedded in her dental calculus. Raman spectroscopic analysis revealed these pigments to be lapis lazuli: an immensely valuable commodity in the Middle Ages and used only by the most skilled artists in works of the highest order. What made this discovery all the more spectacular is that she dates from around the eleventh to early twelfth century where examples of the expensive mineral, mined only in one region of Afghanistan, are exceptionally rare. Whilst numerous theories have been proposed as to how it found its way into a one thousand year old dental plaque, the prevailing thought is that this woman was a monastic scribe – and an accomplished one at that. The copying of Christian manuscripts was vital for its spread beyond Latin Christendom throughout late antiquity and the middle period, with dedicated writing rooms – known as scriptoria – established in monasteries for this purpose. The frequently reproduced image of the medieval scribe in a candle lit room: his tonsured head bent over a desk as he commits to parchment the gospels of the four Evangelists, illustrates the false notion that writing in the Middle Ages was solely the pursuit of men. Although evidence of the role that women played in the preservation of ecclesiastical literature is immensely sparse, documented accounts of the female scribe do indeed exist.

The lack of signature on what textual evidence does remain, however, makes the task of identifying scribes an incredibly problematic one. Very little can be safely attributed to any one person, let alone exclusively to the hand of a woman. Whilst the vast majority of references to female writers and illuminators exist second-hand in passing reference, there are a modest number of signed works. A female scribe by the name of Duriswint is attributed to a small prayer book crafted for Emperor Otto III; written using gold ink upon purple parchment, it was a luxurious gift for a tremendously powerful individual, suggesting that Duriswint was greatly respected in her trade. Monastic communities were vital, not only as centres of ascetic practice and veneration, but as institutions where women too were afforded a literary education. Gisela, abbess of Chelles and sister of Charlemagne (fl. 785-810), was responsible for a large scriptorium of nuns in which a number of works were produced bearing their signatures. Although largely uniform and indistinguishable from one another, the quality of the manuscripts created demonstrates both their skill and their rigorous training. Whilst not erroneous to assume that the majority of lay people during the Middle Ages were illiterate, it is often assumed that women had little to no access to education regardless of status. Indeed, there is a lack of textual evidence to the contrary and quantifying literacy rates – male or female – is a fruitless task, but such examples begin to challenge the suppositional historiography upon which the presence of the female scribe has been established.

Although manuscripts produced in the monastic scriptorium are difficult to assign, tangible evidence of female authorship predates the Dalheim woman by millennia. Enheduanna of Sumer (fl. twenty-third century BC) not only has a number of devotional hymns ascribed to her but is the earliest known recorded author – male or female. Female lyric poets, such as Corinna and Sappho, flourished in sixth century BC Greece. In the fourth century AD, as Christianity came to be the dominant religion of the Roman Empire and literary practices evolved with it, so too were women lauded for their penmanship. Eusebius of Caesarea, in his Ecclesiastical History (c. early fourth century), references the “girls trained for beautiful writing”, producing manuscripts for Origen. Women are not only centred in this instance but were, as Eusebius suggests, highly proficient calligraphers producing manuscripts on behalf of a very prominent Christian theologian. The role of the medieval scribe was not merely secretarial; the illuminations of gospel books of the early medieval period reveal in glorious colour the heights of monastic artistry at this time. Similarly, the quality of the materials used reflects the importance of the commission; the glorious eighth century Lindisfarne Gospels were written upon vellum crafted from some 150 calf skins. Eadfrith – the scribe responsible for their creation – was, however, unable to procure the rare lapis lazuli found on the Dalheim woman and so created his own pigment from more locally sourced ingredients. Not only was this female scribe using an immensely valuable material in her work, she was using one that was seemingly impossible to retrieve from the far reaches of central Asia.

How this mineral came to arrive in Germany, at what cost and for what purpose are but a few of the copious questions which remain unanswered from this discovery. As postulated by the team involved in analysing the skeleton of the Dalheim woman, it is entirely plausible that she was indeed operating as a scribe at this monastery during the High Medieval period. That lapis lazuli was available for her not only suggests trade connections beyond the presumed reaches of the period, but highlights her status within the field of manuscript copying. This is of course likely to invite speculation – and indeed has already done so – but it ought not to be rebuked for its existence as a solitary example of female clerical excellence; it exists as only one thread in the larger tapestry of women and their ecclesiastical writing. Beyond the medieval scriptorium, female authors were certainly not unheard of. Whilst the clerical reforms established by Pope Gregory VII in the eleventh century threatened to restrict those who were not enticed by the reverence of an ascetic life, female authorship came to the fore during the fourteenth century, exemplified in the writing of Christine de Pisan. If this article seeks to demonstrate anything it is that women were not only active in the production of medieval manuscripts but, as the woman with lapis lazuli in her teeth serves to illuminate, were highly proficient in it.

For further reading on the scriptoria at Chelles Abbey, see: Rosamind McKitterick, “Women and Literacy in the Early Middle Ages” in Books, Scribes and Learning in the Frankish Kingsoms, 6-9th Centuries (Hampshire: Variorum, 1994).

*A special thanks to Dr Zubin Mistry at the University of Edinburgh for his literary recommendations.

Conrad-O’Briain, Helen. “Were Women Able to Read and Write in the Middle Ages?” In Misconceptions About the Middle Ages, eds. Stephen Harris and Bryon L. Grigsby (New York: Routledge, 2008).

McKitterick, Rosamind. “Women and Literacy in the Early Middle Ages.” In Books, Scribes and Learning in the Frankish Kingdoms, 6-9th Centuries. (Hampshire: Variorum, 1994).

View all posts by Tristan Craig